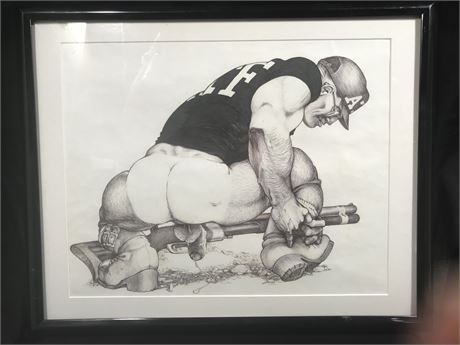 From my personal collection, this is an original artwork by F. Valentine Hooven III, and is a signed pencil on paper artwork. Featuring a masculine ATF agent and his rifle, buckling his boot. The piece measures 21" x 17" framed and 16 1/2" x 13" matted area. This is a cheap plastic frame, and can be shipped with or without it. I have been the custodian of this piece since 2005, when I acquired it from a Los Angeles collection. I do not know exactly when this piece was done by Hooven, but believe it to be from the 1980's or 1990's. The signature is on the left leg, just above the boot buckle.

This is a true piece of gay art history!

This item will be professionally packed and insured for full amount for shipping.

May 25 1943, born at the height of WW II, Valentine was raised everywhere from Great Falls, Montana, to Berlin, Germany, attended the Philadelphia College of Art on scholarship for one and two-thirds years before having a nervous breakdown and going into the Merchant Marines as a deck hand on Mobil Oil supertankers. Back ashore, he became involved in live theater,  first as a stage hand, later holding just about every position a theater offered, beginning in Philly, then Frisco, then to Hollywood to become a stunt man before his creative illustrations finally began to sell to the Gay magazines, appearing in most of the popular publications of the 1980s and ’90s until focusing on Handjobs, which has published all of his erotic work since 1999.

Questions & Answers Sign in to post a question Sign In
Q: Hi. For some reason the text of your description is to LARGE and disappears on the right margin, so is not readable on a standard laptop screen. I see no way of correcting this on my end. Thanks. posted by: 40sboy 7/5/2021 11:06 AM CT
A: Thanks for letting me know. It should be corrected now!