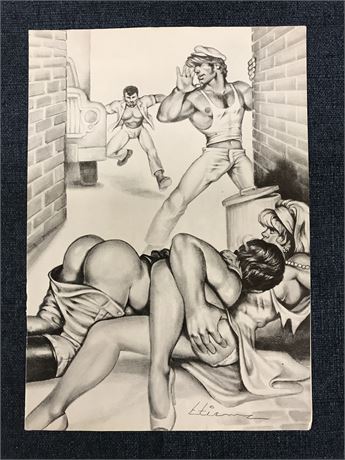 A rare print from Etienne, one of the most important gay artists known. This one is from the Back Alley Sex series. The set tells a story of a hetero couple having sex in the alley, when two truckers from Dom’s Quality Meats see them, run her off, and have their way with the man.  :)

These prints were sold through mail order and some “gay” stores around the country in the 80’s. This is the original sold by Etienne, not a homemade copy.

Domingo Francisco Juan Esteban "Dom" Orejudos, Secundo (July 1, 1933 – September 24, 1991), also widely known by the pen names Etienne and Stephen, was an openly gay artist, ballet dancer, and choreographer, best known for his ground-breaking masculine gay male erotica beginning in the 1950s. Along with artists George Quaintance and Touko Laaksonen ("Tom of Finland") – with whom he became friends – Orejudos' leather-themed art promoted an image of gay men as strong and masculine, as an alternative to the then-dominant stereotype as weak and effeminate. With his first lover and business partner Chuck Renslow, Orejudos established many landmarks of late-20th-century gay male culture, including the Gold Coast bar, Man's Country Baths, the International Mr. Leather competition, Chicago's August White Party, and the magazines Triumph, Rawhide, and Mars. He was also active and influential in the Chicago ballet community.