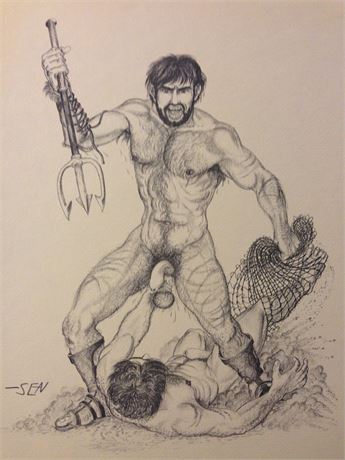 Original and complete 6 print set entitled "Ancient Warriors" by "Sean" the Artist. They come in the original portfolio cover from Sean/Leather Fraternity. This set is not hand signed. Excellent condition, never taped, pinned, or framed. Each measures 8.5 x 11.

These are not homemade copies, but the actual print sets released and sold by Sean.
John Klamik was born on July 22, 1935 in Chicago, Illinois, where he studied at the world-famous Art Institute. He moved to California in the mid ‘60s, settling in West Hollywood which, next to Chicago, was his favorite city in the world.
While working as an artist and Display Director for the Akron Stores, he combined two of his loves - art and activism - as the original editorial cartoonist “Buckshot” for the old Advocate.
During the next three decades, as “Shawn” he contributed mainstream cartoons to mainstream gay newspapers and magazines and, as “Sean,” to more specialized
gay publications - including Drummer, Bound & Gagged and Red Tails ... created murals for such famous Hollywood sites as Manspace, Hollywood Spa and The Sewers of Paris, as well as for Leather bars in Los Angeles and San Francisco ... wrote and illustrated graphic novels ... and illustrated many books and short stories for such writers as Larry Townsend and R.F.M. (Roger Mays). Indeed, he worked until nearly the end, delivering his final illustrations the day before his first stroke.
He exhibited at the Tom of Finland Foundation art shows, and his original art is owned by collectors worldwide.