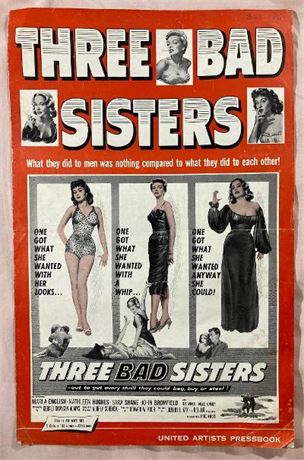 IMPORTANT, THIS IS A LARGE MAILER SENT TO THEATERS, TO ORDER MOVIE POSTERS AND OTHER MEDIA. IT IS NOT A POSTER.

IMDB has this to say about the movie; A millionaire dies in an airplane crash, leaving all of his money to be divided among his three daughters. One of the daughters doesn't want to share any of it, so she plans to get rid of her two sisters.

Movie studios typically sent out large media catalogs for each movie, where the theater management can order additional posters, other photos, pre-written media articles, and much more. Once the order was placed with the studio, the theater didn't need this mailer, and they were simply thrown away.

This was considered a very racy and sexual movie back in 1956, with lots of suggestive parts with bondage, sex, and other titillating [for the time] scenes. I've owned this media catalog for almost 40 years, and have never seen another example for sale. Condition is overall good, but the folded edge of the cover has split top and bottom, but the pages are still attached. Minor edge and corner wear as well.

Free shipping in USA 48 states only.