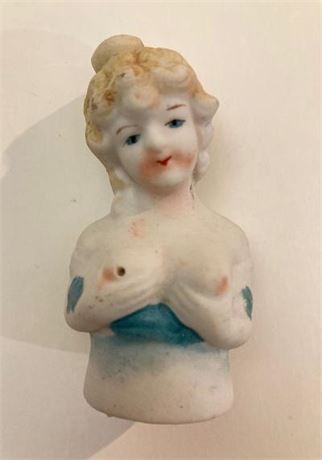 This has been in my private erotica museum for close to 40 years. It is marked on the bottom "Made in Japan", and is estimated to be more than 100 years old. Due to it's age, the original rubber squeeze bulb has disintegrated, but they are available if you want to use it. To use the figure, the squeeze bulb was depressed and the figure held underwater as the bulb is released, allowing water to fill the inside of the figure. Then simply point it as something or someone, and squeeze the bulb hard. Water will shoot out of her right nipple. For the times when it was made, this was a very salacious item, often considered immoral and illegal to possess!

Until recent times, these were often thrown away by elderly ladies when they were discovered. As they are bisque ceramic and very fragile, once they are dropped on a hard surface, they usually shatter into multiple pieces, hence they are hard to find today.

No cracks, repairs or other damages, missing rubber squeeze bulb.

Price includes free shipping in the USA 48 states only.