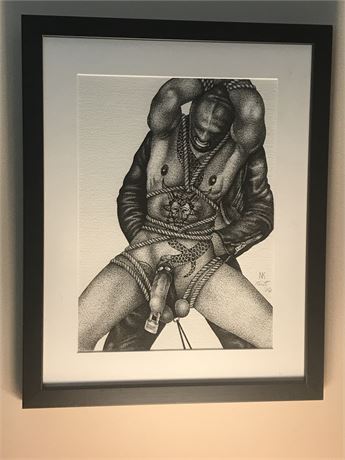 From my personal collection, here is an original piece, signed and dated 1984, by the gifted Nigel Kent of Australia. This piece is in excellent undamaged condition, and measures 12 1/4" x 15 1/4" framed. The matted portion measures 8" x 11". I have been the custodian of this piece since 2005. This piece is featured in the book of his art called "Der Mann in der Kunst" which in German simply means "The Man in the Art". Professionally matted and framed.

This is a true piece of gay art history!
Nigel Kent 1933-2017 :(
This piece will be professionally packed and shipped with full insurance.

Nigel Kent was born in 1933 in Australia, and studied art in Sydney before leaving for England in 1959 to build a career as an artist.

"I was one of the first blokes on the leather scene in London," Kent recalls. "It was all behind closed doors in those days. There were only a few of us. Things are a lot different nowadays!

"I was brought up in a very puritanical way," Kent continues, "so when I first encountered the scene I had a lot of trouble from a morality point of view. What right had I to bash some guy up and enjoy it? Then I discovered that it wasn't a matter of right or wrong. It's a matter of self-acceptance."

Kent moved to Amsterdam in 1973, delving deeper into the leather and S/M scenes, feeling right at home in this new world -� and the role of a Master.

"The cold Dutch climate and leather go very well together," Kent observes. "I like the winter darkness -� the light in Australia is too clear for me."

In 1978 he began making homoerotic drawings under the pseudonym of James D. He got to know RoB, and quite soon was having his first exhibition at RoB's gallery.

"In my first exhibition at the RoB Gallery, I was shown alongside Tom of Finland, who without a doubt was the most celebrated leather-oriented, homoerotic artist of our time. The consistency of his technical style and his enormous output speak for themselves. The character known as �Kake� in particular, with his insatiable lustful cravings, sure gives me those down-under stirrings!

"I remember my first reactions to Tom's work extremely well. I was at a gay brunch in London and some very illicit (for those days) copies of Kake were handed around. I laughed -� with a kind of absurd embarrassment -� as we all did back then.

"Then I got a terrific stiff cock. Those bloody great dicks were just too much for this innocent Aussie. Still, you must take into account that the year was 1961 and I had just recently arrived in London!"

Inspired by Tom of Finland's work, Kent put aside his work in sculpture and turned to drawing. "I said to myself, I can do that too," and the subsequent sale of his first drawing lifted the artist out of a severe depression.

Home, for Kent, is the Netherlands. "There's an enormous camaraderie here in Amsterdam," he says. "I like the leather guys here. You don't have to say 'Hello' all the time, but it's still a special feeling." He has never returned to his native Australia.

Technical perfection in both anatomy and detail is a defining characteristic of Kent's work. Quite often, however, the face is absent in the image. The reason for this is not, as often assumed, to lend an anonymous, and therefore tougher, character to the drawing. Instead, it allows the viewer the opportunity to enter the fantasy world that he is viewing.

Kent is regarded as one of the most important artists working in the leather and S/M genre. The quality of his drawings is unusually high, and has been compared to the work of his friend, Bastille, also well known for his male erotica. Two older, influential artists for whom Kent has great respect are Domino and Rex.