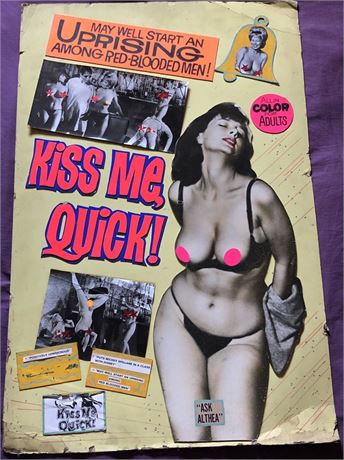 One of a kind thick stock poster board with clip art glued on.

Kiss Me Quick! is a 1964 American Sexploitation film directed by Bethel Buckalew. This was found in an old theater in Downtown LA in the mid '80s. It seems to have been displayed in the Art Cinema (Pussycat Theater) in Oakland, CA and possibly returned to G&S.

When researching Art Cinema Oakland, CA further, I found this:  The tiny Regent Theatre was built in 1913, was renamed the Newsreel Theatre in 1941, and was subsequently known as Peerlex Theatre, Art Cinema, and most notoriously, as the Pussycat Theatre until its closure.